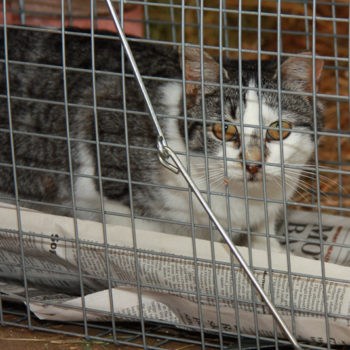 Can you imagine how terrifying it must feel for cats who are trapped for sterilization and returned to their outdoor habitat, especially when the cat is not socialized to humans? And you probably don’t need to imagine how much stress pet cats can experience when taken to the veterinarian — if you’ve ever owned a cat, you probably already know.

Two studies, both published in the last few weeks, examined the potential of a human drug called gabapentin to address the fear, anxiety and stress of cats in both those situations.

Gabapentin is an anti-seizure drug commonly used for nerve pain in both human and veterinary medicine; it’s frequently prescribed for shingles in people, for instance. It’s also recognized as having anti-anxiety effects in people, cats and dogs, but until recently this effect had not been studied in cats.

The first article, published in the Sept. 2017 issue of Advances in Small Animal Medicine and Surgery, reported on a double-blind, placebo-controlled study looking at the ability of gabapentin to reduce the stress scores of trapped community cats. Trapped cats were given a single dose of liquid gabapentin orally via syringe; the control cats were given a placebo liquid, and two different dosages of gabapentin, 50 mg and 100 mg, were used in different groups of cats.

What did they learn?

Discussion of the study results in the TNR community have centered on the difficulty of pre-medicating the cats prior to transport to the clinic, given that the cats are unowned and there’s no patient-veterinarian relationship to permit prescribing or dispensing the drug in advance.

However, from a strictly medical point of view, it’s likely that administering the drug before the cats have been frightened by trapping, transport and admission to the spay/neuter facility would go much further in reducing the cats’ fear and stress.

This assumption is supported by a second study, published in the November 15, 2017 volume of the Journal of the American Veterinary Medical Association (JAVMA), which looked at the same drug given to pet cats who were extremely fearful of veterinary visits, some of whom were unable to be examined at all. Around half the cats were given 100 mg of gabapentin in capsule form, and the other half a placebo. The owners and veterinarians didn’t know which cats had received the medication and which hadn’t.